A history of pulled pork

Pulled pork cooking has its roots in the Southern United States, where early settlers brought pigs with them when they arrived. As cattle perished, pigs were the only animals that could survive the weather conditions, hence the reason why pork was the only variety of meat available to the settlers. Eventually the pulled pork method of cooking was invented.

Pulled pork is a method of cooking pork over a low heat for an extended period of time, slowly softening the connective tissue of the meat so that it can be pulled apart by hand and where pork is cooked to a very tender consistency. Traditionally it involves cooking pork over a low smoky fire for a long time but this can also be achieved by long slow roasting in a conventional oven too. Several culinary traditions have a history of pulled pork and many people associate it specifically with the American South, where it has almost become an art form and a common dish served at parties and celebrations. But making pulled pork at home is time consuming.

The definition of pulled pork is the softness of the meat once it has finished cooking but the dish can be prepared with a wide range of sauces and rubs. Depending on the region, you may see pulled pork with spicy sauces, sweet mellow sauces or tangy sauces inspired by regionally available spices. In Tennessee pulled pork is made with arm and blade shoulder meats and is served with a tomato condiment, whereas the North Carolinians have pulled pork made from both mixed cuts and shoulder cuts with a vinegary sauce or without any sauce. The Southern styled smoked pork is also commonly referred to as pulled pork. Our own particular regional slant combines Scottish pulled pork with haggis- a delicious and truly Scottish combination which many of our customers absolutely love. Other delicious combinations are available too!

In addition to Southern US cuisine, pulled pork also appears in Polynesia, many parts of the Caribbean and parts of Southeast Asia, thanks to abundant pig populations in these parts of the world. The shoulder cut of pork, or mixed cuts, at times referred to as the Boston Butt, is commonly used for pulled pork cooking. Although basically the name pulled pork is derived by the action of being able to pull the pork by hand, other forms such as sliced, chopped and shredded are also often referred to as pulled pork.

As we can testify at Oink, pulled pork is extremely popular when served on a roll (or a bun as our American cousins would call it) as a sandwich. The tenderness of the meat is one factor that seems to have made pulled pork recipes a real favourite with many, though the long cooking time is much less appealing to the home cook.

Fear not, there’s always a succulent hog roasting at Oink to keep lovers of pulled pork this side of the Atlantic very happy indeed. Enjoy!

In the running for Takeaway of the Year

We are delighted that Oink has been shortlisted into the finals under the Takeaway of the Year for the South East,  at The 5th Food Awards Scotland 2018.  Congratulations to all the other businesses who have been shortlisted also.

So watch this space….

Oink was delighted to attend and serve our delicious hog roast rolls at Earlston High Schools first ever Alumni event this June. We provide outside catering at many events and especially enjoyed this one, not least as the weather was great but we were ably assisted by members of our wider family too!

It goes without saying that we are passionate about our delicious hog roasts and we know from feedback from you, our customers,  that you do too.  Our aim is to bring a quality natural product from the countryside to the city.  We love what we do at Oink and we do like to have fun while we are working.  So we thought we would write a wee blog piece with five fun facts about pork and an added bonus is that facts one and two also highlight the health benefits of eating pork too.

1.    Iron is a mineral often lacking in infants, teenagers and women. The iron in pork is easy for the body to absorb and also aids the absorption of iron from bread and vegetables.

2.    Pigs are the world’s most consumed animal and a third of that in the UK is made up of our favourite breakfast dish the bacon sandwich.

3.    The work “barbeque” originated with French-speaking pirates who called their Caribbean pork feast “de barbe et queue”. It translates to “from beard to tail,” reflecting the versatility of the hog.

4.    Pork has a high protein content (around 20%). Protein is important for muscle building and for keeping organs healthy.

5.    Finally pulled pork has its origins in the deep south of the United States, in places like North Carolina and Tennessee though at Oink like to think that we have made it our own here in the beautiful city of Edinburgh.  As a recent reviewer from Singapore recently said about Oink.

“Heavenly. This is a place that you have to visit if you are in Edinburgh. We walked pass Oink while walking up to the Edinburgh Castle and I told my wife that I have to eat here. So we did after visiting the castle. My oh my the Pull Pork Sandwiches are heavenly and I had mine with Haggis. It was one of my greatest meals while in UK. I am already dreaming of having it again.”

Thank you to all who have entered our recent competition on Facebook to name our new mascot which is in our Victoria Street shop.

and the winning name and runner ups are; 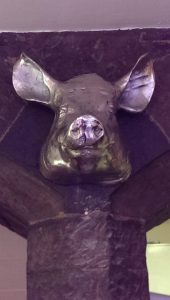 Oink Mascot in our Victoria Street Shop – can you spot it?

The winners were drawn at our team meeting on Monday the 11 May.

We would like to thank everyone for your suggestions, great names and the selection process will not be easy.

We have excluded no one and all names are in the running.  The competition really is just a bit of fun and other that using our Facebook account to ask for your suggestions, it has nothing to do with Facebook, nor are Facebook involved in anyway.

The winners will be contacted by private message, and here is the prizes that they will receive;

The winner will receive a Oink Hoodie and a voucher for a grunter
2nd prize, Oink T shirt and a Oink voucher
3rd prize Oink Hat and Piglet voucher