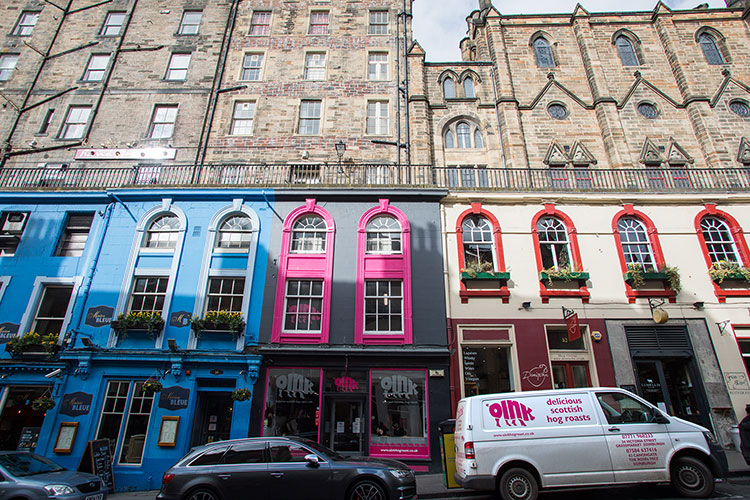 Oink is proud to have two outlets in Scotland’s Capital City located on the Canongate (bottom of the Royal Mile) and Victoria Street in the heart of the city’s historic Old Town.

Edinburgh is one of the most beautiful cities in the world and those of you who follow us on Facebook and Twitter know that we love to share photos and tips about the fabulous city we are proud to be based in.

So we thought we would share some facts about Edinburgh that you might not know, we have done some research and here are our favourite 5 facts that we discovered.

1.    Listed Buildings
A staggering 75% of buildings in Edinburgh are listed.  In fact outside London we have the most listed buildings of any city in the UK.  Oink is proud to be situated in listed buildings in both our Canongate and Victoria Street shops.  Just think – How many people and businesses that have lived and worked in these buildings before us?!

2.    Royal and a Mile.
The Royal Mile is called this because it is actually a mile from Edinburgh Castle at the top of the hill to the Palace of Holyrood House at the bottom of the hill.  This means it is almost a mile too between our two shops too.   So you could eat an Oink Roll at Victoria Street and possibly be ready for another by the time you walked to the Canongate shop at the bottom of the Royal Mile.  Well it’s a good excuse for another roll anyway.

3.    A Volcano in the City
Edinburgh’s highest hill at 822 feet is Arthur’s Seat, is also an extinct volcano.  The original Gaelic name means Height of the Arrows.  We do get lots of walkers in our Canongate shop who are well and truly ready for an Oink Roll after their climb.  The view of the city from the top is certainly worth the walk, as is the Oink Hog Roast roll, but in saying that we are showing a certain amount of bias.  Though Trip Advisor and Yelp reviews would prove we are not alone in this.

4.    Gannets at the Zoo
Edinburgh Zoo is one of the most popular attractions in the city.  But did you know that the first animal that was bought by Edinburgh Zoo was a gannet and cost 18 pence?   That is why today a Gannet can be seen on the in the crest of the Royal Zoological Society of Scotland to this day.

5.    Tea slurping a national habit?
If you live in Edinburgh long enough you will certainly hear the phrase “You’ll have had your tea?”  It actually dates back to 1729 when the nobleman Mackintosh of Borlum complained of tea-slurping as a national habit and not socially acceptable.  So when out visiting he always said he had his tea in the hope he could get a glass of beer instead.  Seems sensible to us and an Oink roll goes very well with a beer whether that’s a ginger beer or a pint though many like it with a cup of tea too.