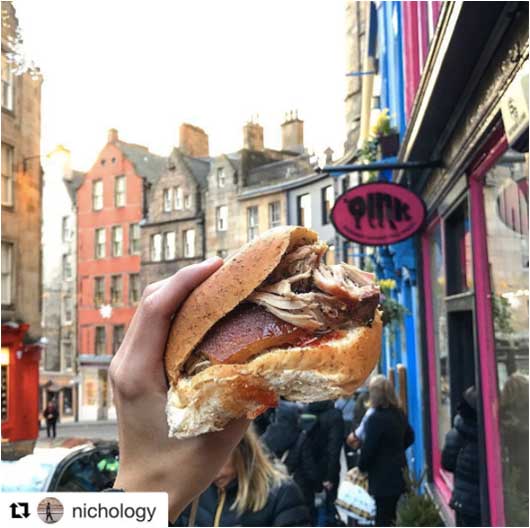 With our two great locations in the heart of Edinburgh’s Old Town in Victoria Street and the Canongate on the Royal Mile, the Oink team enjoy celebrity spotting particularly during the Edinburgh Festival but also benefit from being one of the prime locations for the many movies that are filmed in Edinburgh.  Recent movies filmed here have included One Day and Sunshine on Leith where key Edinburgh landmarks such as the Mound (scene of the song 500 miles) were showcased to a worldwide audience.  There is one film though that has been synonymous with Edinburgh for showing the darker side and that is Trainspotting and in the past few weeks the Oink team along with many in Edinburgh have been talking and spotting the filming taking place for the sequel likely to be called Porno (if it’s true to Irvine Welsh’s sequel book) which is due for release on the 27th January 2017.

All this movie talk got us thinking and we decided to take a look at what has been filmed at or near our two outlets.

Arthurs Seat
Edinburgh’s extinct volcano looks down on the city and particularly the Palace of Holyroodhouse and the Scottish Parliament (not forgetting our Oink Shop just up from the parliament on the Canongate) and is the scene of movies such as One Day, the 2004 version of Greyfriars Bobby, Battle of the Sexes starring Peter Seller and Chariots of Fire.

The Royal Mile
The Royal Mile linking Edinburgh Castle at the top to the Palace of Holyroodhouse at the bottom is a fabulous backdrop for films with the many closes going off the street and its rich history it is arguably a Directors dream location.  Films shot here include Cloud Atlas shot at the City Chambers where Frobisher (Ben Wishaw) escapes down a drainpipe leaving behind Sixsmith (James D’Arcy).  And in Parliament Square Emma, Dex and friends meet up after a long evening in One Day. It is also the Christmas Market scene in the 1996 film Jude.

The Grassmarket
This is the location for many movies and TV shows including Pramface, Complicity, Filth, Book of Blood, Outcast, Mausam and Taggart.  And an old movie but a classic is the Prime of Miss Jean Brodie.  The Grassmarket is the scene in the film when Miss Jean Brodie (Maggie Smith) instructs her girls on Mary Queen of Scots and Mussolini two historical characters not often linked. 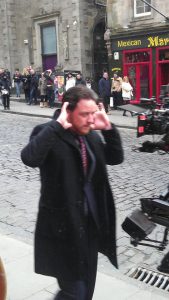 Victoria Street
Finally in Victoria Street we have seen quite a few films and TV filmed including James McAvoyy in Filth which was filmed just outside Oink allowing us to take the photo we have included in this article.  Other films shot here include One Day, Case Histories (which again gave viewers a clear shot of our Victoria Street Oink Shop) Driving Lessons starring Julie Walters and Cloud Atlas starring Tom Hanks and Halle Berry.  Before our time but the 1986 Scottish Film Restless Natives was filmed here with a motorbike chase sequence right above Oink at Victoria Terrace.

We hope we have given you a flavour of some of the movies shot in Edinburgh.  If you would like more information VisitScotland in association with Film Edinburgh, This is Edinburgh and Transport Edinburgh have produced a Edinburgh Film Map so you can see Edinburgh through the lens of the Movie Camera as you travel around the city.

And if you do decide to do the Edinburgh Movie Trail and find yourself popping by our Canongate and Victoria Street Shops, then you have a great excuse to enjoy an Oink or a Grunter.  You might even spot a famous face while you are enjoying your roll.